We have to make adjustment for the current state of our world right now, and much of that means how we promote our talents to art buyers. I used to prefer to send out postcards to businesses but now most are working remotely and prefer email. So, I crafted this mailer to send out to everyone, just as I would have done on a postcard.

I also included a few process videos I made for my students at Montclair University, to show them a paint rolling technique I learned from one of my mentors. First, I do the drawing digitally and print it on watercolor paper. Then, I mix acrylic paint with clear gesso and roll the paint over the drawing. When it's dry, I begin going over it with colored pencil. The clear gesso allows the paper to become like sandpaper and picks up the colored pencil easier, and with added texture. 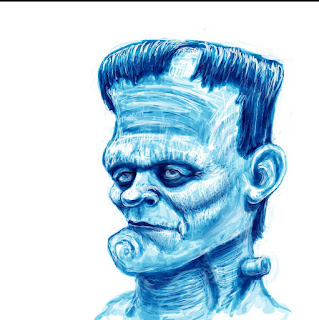 Why I Decided to Go Back to Grad School Continued... 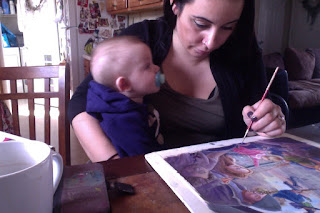 Going back to graduate school gave me a chance to build several of my dream assignments and to experiment with a process that was new to me. I had already illustrated several children’s books, but had never written one myself. Creating a book from scratch would mean that I could illustrate something that truly excited me, as some of my recent work through my agent did not. I chose to venture into the realms of Halloween, a holiday I adore. I love the colors of fall, apple picking, the smell of a homemade apple pie, making costumes, and seeing all the children running from house to house for candy. Tricky Treaters is a thirty-two-page picture book with very little text, about three children, dressed as a vampire, a mummy, and a werewolf, visiting spooky houses for candy. The book also tells a secondary story about a crow and a somber scarecrow that readers can visually follow throughout the story. This picture book dummy is intended to be whimsical and humorous, with a plot twist towards the end. Working on this book dummy along with the three illustrations that I took to completion satisfied my creative energy. I could build up my frame of reference, develop these characters from the ground up, and experiment with the finals to work in a new process that I found to be successful.

Teeny-Rex’s Terrible Manners is another thirty-two-page picture book, this time with a narrative to accompany my illustrations. It touches upon the themes of bullying, learning good manners, and cultivating an overall sense of belonging. This picture book dummy and the three completed illustrations helped me focus on my character development and stretching the poses so my characters could feel more alive, animated, and humorous. Again, I felt the satisfaction of building characters that began in my imagination. I worked them out on paper and then sculpted them into clay to create reference for three finished illustrations, along with a book dummy.

If there is anything I learned from the successful mentors and visiting artists I have met through this program, it is that in order to have a successful career, I should not put all my eggs into one basket. Working on children’s books is more of a comfort zone for me, as it is something I have some experience of. Although I want to work on my own books, I also want to dive into licensing. I can still draw and paint the whimsical characters that may appear in a storybook, but also venture into card stock, paper goods, advent calendars, party materials, and greeting cards. I decided to create two characters for a small series that I will attempt to sell to licensing companies. The first character is a good, old-fashioned grandma who loves to cook, bake, and grocery shop − except she’s a witch. This humorous series will allow me to stretch my character development skills, to create this long-chinned old hag, in a series called Confessions of a Kitchen Witch. I am hoping that one day, she will appear on calendars, front-porch flags, or maybe even a pair of socks!

My second licensing series is about a little toddler elf living at the North Pole. This series gave me a chance to study and push my human character development, as well as to draw on inspiration from my own life with my one-year-old son. This little elf finds himself in a lot of trouble at times, but you can’t help but laugh, because he’s just doing what he does best, being a curious, growing baby. This series is called Santa’s Smallest Helper.  I hope to sell him to licensing companies for ornaments, advent calendars, or holiday paper goods.

The work I created for this program represents twelve finished pieces, using a process that is new to me. I took myself out of my comfort zone and attempted to work in a new style. I was pleasantly surprised with the results, and feel not only that my work has improved through the program, but that I have reached a new level of achievement because of the enthusiastic response from my peers, mentors, and other creatives in the industry. I am excited to continue developing this style and to return to the children’s book market as a new version of myself: rebranded, reworked, and reborn.